ABC News’ Alexander Marquardt and Dragana Jovanovic report: Israeli Prime Minister Benjamin Netanyahu said he suspects Iran was behind a deadly explosion aboard a bus full of Israeli tourists in Bulgaria today.​
“All the indications are that Iran is behind this deadly attack,” the Israeli leader said, just hours after at least three people were killed in a fireball aboard a bus at an airport in the eastern Bulgarian city of Burgas.​
Just minutes before Netanyahu’s statement, other Israeli officials said it was unclear if the explosion was the result of a terror attack. But Netanyahu said the new explosion was just the latest in a “consistent pattern” of Iran-backed attacks targeting Israelis around the globe.​
Over the weekend a Lebanese man was reportedly arrested in Cyprus for allegedly planning to attack Israeli targets there in a plot that Netanyahu also said was part of “Iranian terrorism.”​
Last month, two Iranian nationals were picked up in Kenya for allegedly plotting to attack U.S., Israeli, Saudi or British targets there, according to a report by The Associated Press. In recent months, agents suspected of plotting deadly attacks on behalf of Iran have also been arrested in the U.S.,Azerbaijan and Thailand.​
For its part, Iran has repeatedly blamed Israel for being behind the assassination of several of the country’s top nuclear scientists in recent years.​
In his statement, Netanyahu also noted that today marks the 18th anniversary of a bombing attack on a Jewish community center in Buenos Aires, Argentina — an attack the Israeli government blamed on Iran.​
Bulgaria is known as a popular tourist destination for Israelis, the AP reported.​
Click to expand...

I think it's pretty obvious that tensions are high and that the Israelis will likely respond. Is this something that could snowball into a conflict or this just another day between Iran and Isreal?

I'm interested to see how this all pans out.

Obviously this is propaganda. Iran stands firmly against the export of arms and their misuse by bad actors.

The nation of Iran has been elected to serve on a top U.N. Arms Trade Treaty post, the monitoring group U.N. Watch reports.
Click to expand...

I have family currently vacationing in Burgas

dknob said:
I have family currently vacationing in Burgas
Click to expand...

dknob said:
I have family currently vacationing in Burgas
Click to expand...


I've got family on holiday in Bulgaria at the minute too. Had to make some phonecalls fairly sharpish when I heard the news.

Burgas is a big city though, this is a very isolated incident by the airport.

My relatives travel to the coast from Sofia for a month like every year along with much of the peoples of that region.


The people on the bus are of the Jewish faith, not Mexicish. Oh vey, your use of Mexican was inappropriate.

Freefalling said:
The people on the bus are of the Jewish faith, not Mexicish. Oh vey, your use of Mexican was inappropriate.
Click to expand...

Bomber was A Typical - supposedly "Caucasian looking", 20's male, thin, 6 ft +, (geek or hippie) curly long hair to shoulders, wearing shorts/printed T Shirt/sock-less white tennis shoes/baseball cap, and carrying a back pack - a typical summer tourist - with American documents and a Michigan Drivers License that's being checked out now. The bomb was stowed with the luggage under the bus.

How do you spell 'Dearborn'?

Hmmm..if so how but them apples. Former Gitmo guest? Nice. 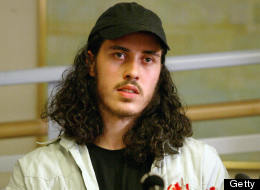 Mehdi Ghezali, the Swede detained by the United States for more than two years at Guantanamo Bay, Cuba, holds a press conference in his hometown of Orebro, 150 kilometers west of Stockholm, July 16, 2004. (BERTIL ERICSON/AFP/Getty Images)
According to a report by The Times of Israel, Bulgarian media named Mehdi Ghezali, a Swedish citizen and former detainee at Guantanamo Bay from 2002 to 2004, as the suicide bomber responsible for an attack in Burgas, Bulgaria, on Wednesday.
The report could not be independently verified.
However, Swedish officials denied the report early Thursday afternoon, and Bulgarian officials told ABC News that the suspect's name was reported incorrectly.
Click to expand...

If Katy Perry's boobs dumped me I too would bomb a bus.

Freefalling said:
If Katy Perry's boobs dumped me I too would bomb a bus.

LOL! I thought the same! ( I mean I thought it was Russell Brand) Then I thought "Weird Al".

Chopstick said:
LOL! I thought the same! ( I mean I thought it was Russell Brand) Then I thought "Weird Al".
Click to expand...


Easiest way to tell them apart? Weird Al has talent.

I dont see Israel doing anything of significance of this.

pardus said:
I dont see Israel doing anything of significance of this.
Click to expand...

I would agree. This story still seems to have legs;

"Bulgarian press names bomber: Mehdi Ghezali" Times of Israel, July 19th, 2012
Bulgarian media on Thursday named the suicide bomber who blew up a bus full of Israeli tourists, killing five Israelis and a local bus driver, in the Black Sea resort of Burgas on Wednesday as 36-year-old Mehdi Ghezali.
Ghezali reportedly arrived in Bulgaria five weeks before the bombing and arrived at the airport via taxi, Channel 2 reported. He was also reportedly given the bomb by someone else, but no further details were provided.
There was no independent confirmation of the veracity of the information. The reports surfaced soon after Israel’s Prime Minister Benjamin Netanyahu had publicly accused Hezbollah, directed by Iran, of responsibility for the bombing. The Prime Minister’s Office made no comment on the reports.
The Bulgarian reports, rapidly picked up by Hebrew media, posited various versions of how the bomber had detonated the bomb, including the suggestion that the bomber had not intended to die in the blast, but may have wanted to place the bomb on the bus and flee.
Ghezali has a Wikipedia page, which describes him as a Swedish citizen, with Algerian and Finnish origins. He had been held at the US’s Guantanamo Bay detainment camp on Cuba from 2002 to 2004, having previously studied at a Muslim religious school and mosque in Britain, and traveled to Saudi Arabia, Afghanistan, and Pakistan, it says. He was taken into custody on suspicion of being an al-Qaeda agent, having been arrested along with a number of other al-Qaeda operatives.
Following a lobbying effort by Swedish prime minister Göran Persson, Guantanamo authorities recommended Ghezali be transferred to another country for continued detainment, and he was handed over to Swedish authorities in 2004. The Swedish government did not press charges.
He was also reportedly among 12 foreigners captured trying to cross into Afghanistan in 2009.
Earlier on Thursday the Bulgarian police released a brief video clip that claimed to show the suicide bomber, responsible for Wednesday’s terror attack on a tour bus full of Israeli citizens, walking around shortly before the blast at Burgas International Airport.
The Bulgarian news agency Sofia reported that the bomber was carrying an American passport and Michigan driver’s license, both believed to be forgeries.
Sofia also reported that the Bulgarian Interior Ministry managed to recover the fingerprints of the bomber, which they submitted to the FBI in the United States and the international police organization Interpol. The FBI and CIA joined Israeli and Bulgarian officials in investigating the attack.
Interior Minister Tsvetan Tsvetanov told Sofia that DNA tests were being run to determine the identity of the Caucasian man, who the minister described as casually dressed with nothing suspicious about his appearance to set him apart from the crowd of people at the airport.
The ministry did not indicate how the police came to the conclusion that the man was the suicide bomber.​


Does it count if you fuck the Swedish Bikini Team?

I wouldn't touch a Scandinavian girl after what I saw and heard in Africa.

the bomber had not intended to die in the blast, but may have wanted to place the bomb on the bus and flee.
Click to expand...


That's kind of what I was wondering about... why put a bomb under the bus, and then get on it? That kind of goes against the typical "yell out Allah Akbar- go boom!" SOP. Kind of like a premature detonation, or his handlers killed him deliberately.

But let me get this straight- dude gets rolled up doing sketchy stuff somewhere he's not supposed to be. He lands in the slammer in Gitmo. His country presses for his return, then they turn him loose. OK fine. But then he gets rolled up AGAIN trying to cross into Afghanistan... in 2009? And no one saw any problems with this, they just let him go AGAIN? I'm trying to figure out why he didn't end up down the road from Freefalling, in the BTIF there on Bagram. WTF.

Marauder06 said:
I'm trying to figure out why he didn't end up down the road from Freefalling, in the BTIF there on Bagram. WTF.
Click to expand...


Or at least serving food in the Yelner DFAC with all of the other former Muj.

I really want to hear the story of the dude missing his eye.

Over 600 Rockets Land in Israel