So by now we all know that Russia has invaded Ukraine.
NATO is refusing to join the conflict unless it spills over into a NATO country. The west is mobilizing some forces for such an eventuality.
Chechnya is sending troops to fight with Russia against Ukraine. Ukraine is asking for military trained volunteers to come and fight with them.

What do you think Putin’s ultimate goal is? Conquer and annex Ukraine? A limited offensive to weaken Ukraine so much that he will be able to manipulate them to his will? Limited territorial gains to secure a land bridge and water for Crimea and secure a buffer zone for Russia’s security?
Something different?

Tell us your thoughts, post updates, pics and videos.

I believe the end goal is to take over Ukraine, Belarus, Moldova, and potentially Kazakhstan on this go around. It will be interesting given the high percentage of Russia's military force being concentrated to Ukraine if other powers make Putin "feel" the effect of being so concentrated.

Interesting comments Putin made about Sweden and Finland and NATO. Finland, who is the honey badger of Europe, is seriously considering membership now.

I don't think he'll go for any NATO country, but the others are in his optic.

Honestly, very hard to tell what his aims were. I thought that the intent was maximum resources for limited aims and taking all of Donbass Region (Donetsk and Luhansk). But then he opened a full assault on multiple fronts, in some sense the Ukrainians were spread thin, but this also kept the Russian Army thin.

The weird part about deploying Chechens means Ukraine didn't fall fast like he thought it would and we're talking about some pretty nasty dudes that may be as effective as a poorly paid conscript tactically but is there more for the rape and pillage portion.

But we kept chirping saying we knew this was going to happen and we did nothing about it, now as far as western sanctions? Pretty worthless unless you shut off the spice. Treasury has exempted the Russian Energy sector from Sanctions and this Administration along with the EU has chosen not to kick them out from SWIFT. Those should have been the first moves on the table, but hey don't worry Germany is buying tons and tons of NG and Gasoline from pipelines that traverse through the Ukraine.

Sanctions won't work unless all the countries are all in, and right now there's a lot of resistance to that. If we freeze that assets and the UK freezes assets, that helps, but he can just move money in other ways.
F

The rational decision for Putin was to maximise tension for profit(Nord Stream pipeline revenue going up from the tension he created) and influence, beneath the threshold of war.

Instead Putin chose the seemingly irrational decision that reminds me of Heath Ledger’s Joker burning the mountain of money in Batman:
Putin is displaying a willingness to sacrifice anything/everything to achieve his objectives.

Putin refers to the collapse of the Soviet Union as the worst geopolitical disaster of the 20th century.

I would say how the collapse was managed was the bigger crisis.

$250 billion or so of grey money was stripped out of the former Soviet Union in the 90’s(back when that was a lot of money) and sucked into western banks, most comfortably in The City of London.

That was like kicking Russia in the head while it was already down in the gutter.

Putin reportedly drove a taxi cab or at least considered it to keep food on the table, or so the story goes.

I think the extreme emasculation/humiliation the Soviet Union suffered, as well as Putin personally, has been a key driver towards this tipping point.

I think it is supported by Putin’s absolute disregard for, and disrespect of, the UK with Polonium Tea and Novichok state sanctioned targeted killings that are seemingly sloppy from a tradecraft perspective, but are effective in geopolitical signalling.

I think Putin could have humbled the US/NATO by staying beneath the threshold of war by simply playing with the tension dial for profit and influence. That was the rational/logical choice.

Instead Putin appears to be trying to emasculate/humiliate the US/NATO with his seeming willingness to sacrifice anything/everything to achieve his objectives with the seemingly irrational/illogical choice.

Putin has $600B in cash reserves, more than the US and Germany combined. He is going to need that as strategic depth to get thru after he lit his Nord Stream pipeline cash flow on fire.

What are we missing from the risk calculus?

pardus said:
What do you think Putin’s ultimate goal is? Conquer and annex Ukraine? A limited offensive to weaken Ukraine so much that he will be able to manipulate them to his will? Limited territorial gains to secure a land bridge and water for Crimea and secure a buffer zone for Russia’s security?
Something different?
Click to expand...

Contain, by force if needed, any non-NATO neighboring countries whose leaders resist being controlled by Putin and whose democratic examples expose in stark relief the shortcomings of the Russian kleptocracy and its related narrative of supremacy.

In the case of Ukraine, a full invasion and absorption of the region will contain NATO encroachment while keeping its European members off-balance by expanding Russian territory that much closer to NATO boundaries. 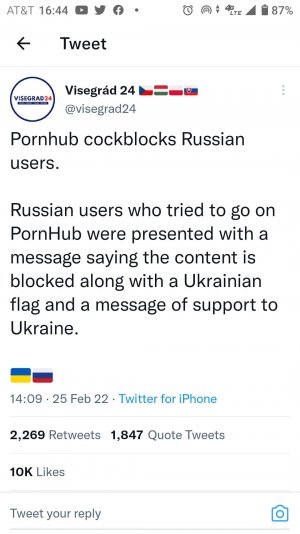 So Canada has already airlifted some "lethal aid" to Ukraine. We're about to send another 460 troops to add to the 800 already in Latvia. We have 850'ish troops in Iraq still. We're short 1000 sailor's and unable to man our new Arctic Patrol Ships. But they scrounged up 3400 troops, on high readiness to deploy to support NATO. Canada is punching above its weight, there's no way we could sustain that beyond a few month's. Less if we had casualties.

That’s AWESOME. That will work better than financial sanctions for sure

Canada is going to win this for the world! Not the vodka!!

I think Russia is going to need almost every bit of that 600 billion of cash reserve. They're going to end up overextending themselves if this thing is not wrapped up in a week, and that military doesn't have the size or teeth to follow Putin's ambitions the way the military did in the '50s, '60s, and '70s. Add their stock marking taking a major hit, assets being frozen, other sanctions, babushka sniping their soldiers in the street, and all the riots back home, the thing does not add up well for Putin.

Russia vetoes resolution that would condemn their invasion...unsurprised.

Flagg said:
I think the extreme emasculation/humiliation the Soviet Union suffered, as well as Putin personally, has been a key driver towards this tipping point.
Click to expand...

There's certainly merit in that. It irked the "old guard" something awful to see the Iron Curtain go NATO.

In the past few days Putin has been spewing belligerent testosterone toward the US, reminiscent of the old Soviet days and Khrushchev's famous "We will bury you" outburst. It's almost as if he's high on Soviet nostalgia, all pumped up to see the tanks rolling again, just like the bad old days of the Cold War...like rolling into Hungary in '56 and Czechoslovakia in '68, cracking down on the reformists with T-55s.

In the meantime he'll wipe his ass with sanctions, even if they hurt his people...a minor inconvenience...and congratulate himself that the EU/NATO-loving Nazi's on his southern flank will soon be back in the fold.
Last edited: Feb 25, 2022

ThunderHorse said:
Russia vetoes resolution that would condemn their invasion...unsurprised.

Location
The Peoples Republic of Anzacistan

The PRC stance is interesting though not unusual as it’s a core belief not to interfere in a sovereign state.

Ooh-Rah said:
Ummm…this is not friendly.

Second one of those of I've seen. Ivan definitely has a completely different ROE. . .